Armando Acosta was born and raised in East LA in a poor family of 12 brothers, some of whom are currently incarcerated. He played professional softball for 15 years, but struggles with addiction that lead him to completely change his life to focus on his recovery. Today, at 51 years old, Acosta has a good job that allows him to also work as an alcohol and drug counselor, maintain his own sobriety, and do work he considers to be important thanks to a pre-hire training program at electric bus manufacturer Proterra.

The training program is the result of a Community Benefits Agreement with Proterra, United Steelworkers Local 675, and Jobs to Move America that was signed in December 2020. The CBA contains specific commitments to invest in underserved communities, by training, supporting, and hiring individuals facing barriers to employment for skilled union jobs at Proterra’s City of Industry facility. 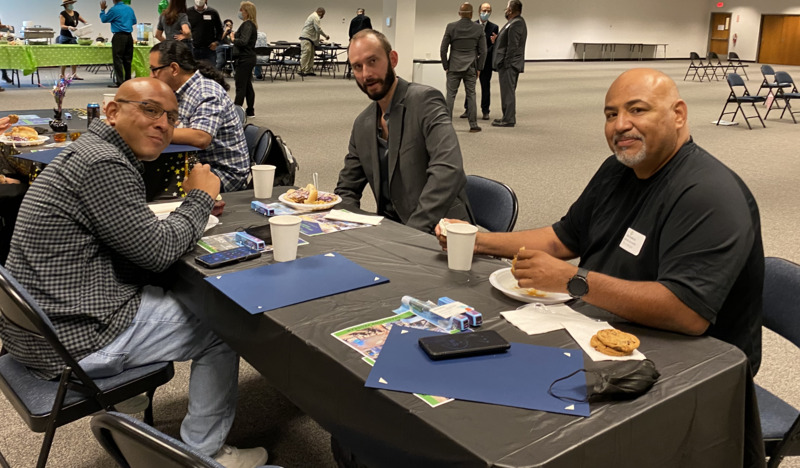 Over the course of the nine-week program, trainees learn about a different aspect of Proterra and the first-of-its-kind electric bus manufacturing technology. Acosta said that a teacher from Citrus College taught the classes, making the program similar to a college course. The only complaint Acosta has about the program is that it wasn’t long enough. “Proterra is a huge company,” Acosta says.

Acosta works as a battery technician from 5 p.m.- 4 a.m. Monday through Thursday, and then works as a drug and alcohol counselor at a rehab facility on the weekends. Acosta said part of why he chose Proterra is that he can keep hours that help him best maintain his sobriety and allow him to aid others in their recovery.

Before working at Proterra, Acosta worked as a parts and service manager for Chrystler. He said partaking in Proterra’s pre-hire program was like an “experiment”; he initially wanted to do it so he could tell clients at his rehab facility what it was like. But Acosta “ran with it” and enjoyed the training program and ended up getting a good job with benefits including medical, dental and vision insurance; a 401K; stock ownership; and union membership. “The benefits are great, people are very nice, the money is good, hours are good,” Acosta says.

When asked what Acosta considers to be a “good job,” he says that it’s about fostering an environment where workers can grow and learn.

“A good job is somewhere where you’re capable of asking questions and not being judged. You’ve got to remember that a job is like family since you spend most of your time working instead of at home, not counting the drive there,” he says. “A good job is a place where you can be safe, comfortable, willing to learn, and be teachable.”

Most of all, Acosta finds satisfaction from working in a burgeoning industry that’s contributing to mitigating climate change—it goes hand-in-hand with the work he does as a drug and alcohol counselor.

“People say it’s funny that I’m a drug counselor and I work at Proterra. But I get to save lives and change the world as well. Proterra’s making a huge difference when it comes to clean air. They’re going to change the industry, and it’s awesome to be a part of that.”

The Electric School Bus Is the Climate Hero We Need