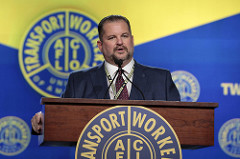 Sworn in as the 10th TWU International President in May of 2017, John Samuelsen represents 40,000 members at the nation’s largest public transit agency. Prior to being elevated to the office of the President, Samuelsen served as Executive Vice President since 2013. Samuelsen is also the former President of TWU Local 100 in New York City – the TWU’s largest local.

A Brooklyn native, Samuelsen was hired by the New York City Transit Authority (NYCTA) in 1993 and was assigned to a track gang in Brooklyn, where he and his fellow union members worked under difficult and unsafe conditions. Managers ignored safety regulations, disciplined workers who spoke up, and had no respect for the workers or their union. While still in his probationary period, Samuelsen’s co-workers elected him shop steward of their local union, and he fought vigorously for their rights. By winning small battles against management abuse, the local was able to slowly turn things around.

From 2001 to 2006, Samuelsen served as chair of the Track Safety Committee, and chair of the Track Division. From 2002–2005 he was Acting Vice President of the Maintenance of Way Department, representing 7,100 workers providing essential services to NYCTA in Track, Line Equipment and Signals, Power and Structure. During that time, he also served as lead negotiator for all safety-related issues during contract bargaining between Local 100 and NYCTA, and authored the Comprehensive Track Safety Bill, passed by both houses of the New York State Legislature.

He still maintains an active public role in New York politics and advocates on behalf of all TWU members.