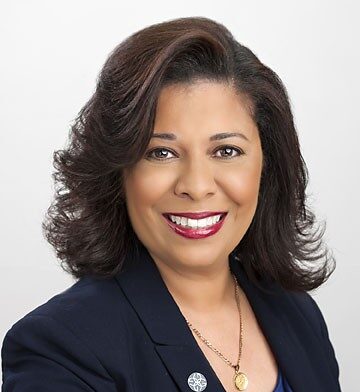 Ana graduated from the University of Colorado in Denver, and began her career in Denver in 1981, where she organized The Concerned Citizens of Westwood. She affiliated with the Metropolitan Organization for People in 1982 and went on to work on local and state campaigns, including enforcement of the Community Reinvestment Act and affordable public services.

Intensely interested in the intersection of politics and faith, Ana attended the Iliff School of Theology in Denver to develop a foundation for organizing congregations. During her theological studies and organizing, Ana’s conviction deepened that organizing was a divine calling for her—the purpose of the miracle that allowed her and her family to safely emigrate from the Dominican Republic to the United States.

Ana began her work in Gamaliel in the early 1990s, as Lead Organizer of MICAH (Milwaukee Inner City Congregations Allied for Hope). During her tenure there, the organization won a $500 million reinvestment commitment from the city’s banks. Ana was also the founding organizer for WISDOM, the Gamaliel-affiliated Wisconsin state organization.  She has been a member of the Gamaliel central staff for nearly two decades, serving as senior trainer at Gamaliel’s National Leadership Training and co-director of the Civil Rights for Immigrants campaign.

In 2009, Ana was named Associate Director, becoming Executive Director in 2012.  Under her leadership the organization’s Fire of Faith campaign is on track to save or create nearly 1 million jobs over 3 years, while also rekindling the 1,000 interfaith congregations that belong to Gamaliel’s affiliate organizations through community organizing.

Ana’s deep sense of organizing as a ministry, her interest in the relationship between faith and politics, and her status as a naturalized immigrant dovetail perfectly with the goal of Gamaliel to be “a community of people living out our faith and values to collectively transform our communities and bring about justice locally, nationally and globally.”

She splits her home life between Franklin, Wisconsin and Atlanta, Georgia. She is married and has two daughters.